“Fig Food is committed to improving the health of people and planet through organically grown, plant-based food,” Henry said. “We’re also passionate about taste and authenticity, which means our Creamy Mushroom soup has a bounty of organic mushrooms in a soy béchamel base, accented by diced carrots and celery.” 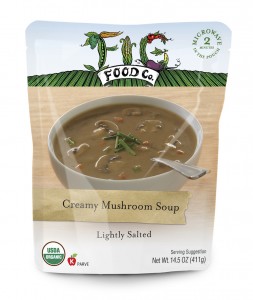 With a recipe informed by noted early-20th-Century French chef and culinary writer Auguste Escoffier’s “five mother sauces,” Creamy Mushroom was created as a plant-based alternative to traditional cream of mushroom soups; one that contained pieces of mushrooms and could be enjoyed alone or as an ingredient. Fig Food Creamy Mushroom contains five grams of protein, no cholesterol and only 280mg salt per serving.